Yawul! The Australian First Nations comprise the longest living cultures in the world. First Nations people have inhabited this land since time immemorial. In southwestern Australia, Noongar people are the Traditional Custodians of the land and sea.

Across Australia, there are hundreds of different Indigenous languages. In southwest and the south coast of Western Australia, there are several different Noongar dialects. We acknowledge the different Noongar dialects. This project was initiated at Albany campus of The University of Western Australia, on Menang/Mirningar Noongar Country, our tallyerark kaaleep boodja (‘home fires’, and akin to ‘home country’). Tallyerark kaaleep boodja describes the coastal habitat perfectly, as family fireplaces were used for many thousands of generations and passed down from ancestors. The content on these Australian website pages are inspired by local Menang/Merningar people. First Nations languages are from a spoken language and were passed on to generations through storylines and to family members, and so the spelling on certain words may differ across the region depending on when and where the word was spelt out.

The title “Mirnong Maat” is Menang/Merningar Noongar language for ‘Whale Travel Path’ and is akin to ‘Whale Journey’. Mirnong means ‘whale’ and Maat means ‘travel path’. As the whales are migrating to and from their feeding grounds they undertake a journey along a path, and here we liken their migration to ‘Maat’.

The meaning behind the Australian logo is an Aboriginal storyline. The Menang/Merningar have had a long connection with the whales that frequent the coast of Albany, part of their totemic practices where they etched whales breaching in the granite outcrops to signify their travel paths.

The First Nations peoples around Albany were fishermen which is evidenced by ancient fish traps that still remain, and are dated to older than 7,000 years. The fish traps allowed for fish to swim into the trap during high tide, and as the tide lowered the larger fish were caught while the smaller fish could swim between the holes among the rocks. This allowed for sustainable fishing over thousands of years, so that the young fish had a chance to reproduce. These fish traps can be viewed today in Oyster Harbour, Albany, Western Australia.

It was in 1826, that brig Amity sailed into Albany and ‘claimed’ the land for Britain, which was only around 200 years ago. The arrival of Englishmen to Albany meant the meeting between Noongar people and Englishmen. On the timeline of things, 200 years is small in comparison to the time First Nations people have been connected to this land (more than 60,000 years ago) and are the first sovereign Nations of the Australian continent.

Listed as Endangered under Australian legislation, the southern right whale has slowly recovered from whaling in southwest Australia. Today, aggregations of whales can be found along the West and South Australian coast, as shown in this map:

There are thought to be around 4000 whales that use aggregations in southwest Australia – WA and Head of Bight, SA. In contrast, there are estimated to be fewer than 300 southern right whales in the southeast, including the Encounter Bay, SA and Warrnambool, VIC, aggregations. The southwest is also recovering faster and the two regions show differences in genetic markers, suggesting that they are demographically and genetically distinct. 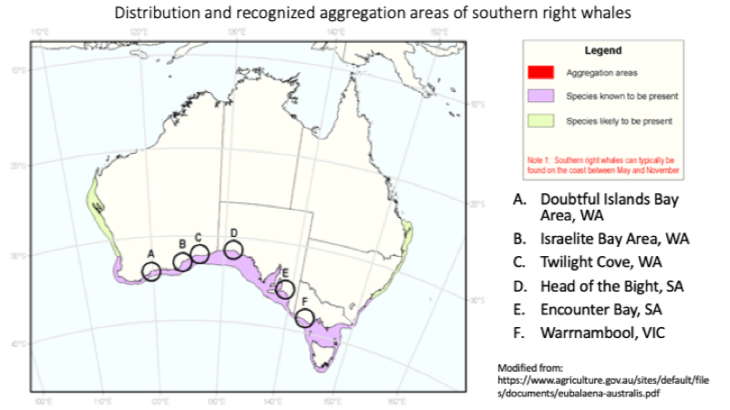 Acknowledgements to the project and funders

The University of Western Australia’s Great Southern Marine Research Facility, at the Albany Campus, and Macquarie University, for support. The Australian tagging project is funded by an anonymous supporter. Thank you to the Emu Point Café for funding the Australian First Nations’ components. The Merningar language and cultural input for the Mirnong Maat (Whale Journey) project is used with permission and is the intellectual property of First Nations peoples. Gratitude to Lynette Knapp, a Merningar descendent and Elder, and daughter Shandell for naming of the tagged southern right whales and the title of the project “Mirnong Maat”. Thank you to Menang/Merningar artist Michael Cummings, for the whale logo for the Australian research project (Xthensio Arts). Appreciation to Prof. Stephen Hopper at The University of Western Australia, Albany campus, for assistance and support with the First Nations component.

We acknowledge the overall project (southwest and south coast of Australia) is situated on Noongar land and sea, and that Noongar people remain the spiritual and cultural custodians of their land and sea, and continue to practise their values, languages, beliefs and knowledge. We pay our respects to the traditional owners of the lands on which we live and work across Australia.